JULES
You win.
Jules raises his hand off the briefcase.

JULES
It’s all yours, Ringo.

Jules flips the locks and opens the case, revealing it to
Pumpkin but not to us. The same light SHINES from the case.
Pumpkin’s expression goes to amazement. Honey Bunny, across
the room, can’t see inside.

PUMPKIN
(Spoken softly) Is that what I think it is?

Throughout the movie Pulp Fiction, characters have been influenced by a mysterious briefcase owned by the big crime boss Marcellus Wallace. This plain black object is found in the opening sequence when Vincent and Jules recover it from some bumbling criminals.

The briefcase is an example of a MacGuffin, sometimes spelled McGuffin or Maguffin. We know that it is important because bullets were exchanged and lives were lost in its recovery.

The answer is, it really doesn’t matter.

No, seriously. The simple briefcase is there for one purpose — to begin the story or plot. The audience doesn’t really care about the briefcase because they’re more interested in what the characters are doing. 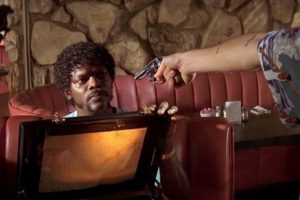 Quentin Tarantino even pokes a little fun at the audience in the ending scene, excerpted above. When Jules opens the case and shows the contents to Ringo/Pumpkin, all we (the audience) knows is that the case is valuable and, now that it’s opened, it gives off a mysterious glow that takes everyone’s breath away. Now we want to know what is in the briefcase, but Jules slams it shut and wraps up the scene and the movie. We never find out what was the impetus of over two hours of craziness. Don’t believe me? Just Google “pulp fiction briefcase” and enjoy 174,000 hits and lots of pages with different theories, including Kryptonite and Marcellus’ soul.

The joke was on us, which made the movie even more memorable. It also helped to spur debates as to what was in there, which helped to get the word out concerning the movie.

MacGuffins have been around for a while. The concept can be seen in many old stories, such as the Holy Grail or a certain black bird in a Bogart movie. The purpose of a MacGuffin is to provide a method to get the plot rolling, and the object can be anything external. A big pile of cash or even vague concepts such as glory and honor can be used to begin the tale. The plot revolves around the characters, while the MacGuffin is really ignored for the most part once the story is kickstarted in high gear.

Alfred Hitchcock was well known to use this device to begin his movies starting back in The 39 Steps. Adventures and thrillers used MacGuffins extensively in order to have the story moving along as quickly as possible. Even the original Star Wars: A New Hope uses stolen plans inside R2-D2 as a MacGuffin. Everyone is running around looking for the plans hidden in the little droid. The chase evolves, and in this case so does the MacGuffin’s container — into a beloved iconic character. The data gets extracted at the end of the movie and the final battle against the Death Star commences.

A MacGuffin is a little white lie that the audience or reader plays along with to get to the fun part of the journey. After all, a story about a briefcase would be rather boring, with it being worried about scuffs or how its hinges could use a spot of oil, thank you very much. The hand that holds the briefcase, however, can be a thrilling and satisfying tale.

Guy Anthony De Marco is a disabled US Navy veteran speculative fiction author; a Graphic Novel Bram Stoker Award® nominee; winner of the HWA Silver Hammer Award; a prolific short story and flash fiction crafter; a novelist; an invisible man with superhero powers; a game writer (Sojourner Tales modules, Interface Zero 2.0 core team, third-party D&D modules); and a coffee addict. One of these is false.
A writer since 1977, Guy is a member of the following organizations: SFWA, WWA, SFPA, IAMTW, ASCAP, RMFW, MWG, HWA. He hopes to collect the rest of the letters of the alphabet one day. Additional information can be found at Wikipedia and GuyAnthonyDeMarco.com.
Tagged with