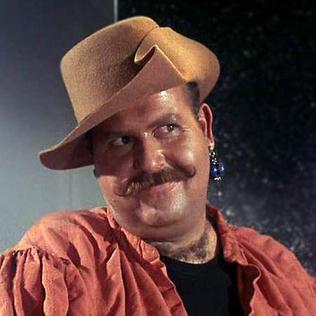 Being the crazed comic book collector and Star Trek fan that I was, I was the only geek at a convention with the skillz to recall who had played Harcourt Fenton Mudd on the original series.

I always liked Roger. His trademark moustache and droll humor can be seen in some of the best television shows from days gone by. Up until his death on November 11, 1986, from hypertensive cardiomyopathy, he was working on several projects. Towards the latter part of his life, his voice-over work from the Star Trek animated series spurred him on to do additional voice work on shows like theSmurfs, Transformers, Jonny Quest and Gummi Bears. His voice had the same character actor uniqueness as his on-screen persona. Many people remember the characters he played, even if they didn’t remember the man behind the role.

Roger was born in my old hometown of Brooklyn, New York on September 27, 1932. He played bit roles and guest actor stints on a virtual who’s-who of the TV golden years. Some of the shows include (of course) Star Trek, Laverne and Shirley, Diff’rent Strokes, Three’s Company, All in the Family, Chico and the Man, McCloud, Hawaii Five-O, Hogan’s Heroes, Voyage to the Bottom of the Sea, I Spy, the original Batman TV show (as Colonel Gumm), Man from U.N.C.L.E., and Route 66. He was a prolific and sought-after character actor with comedic undertones. He could also play the heavy, and his large, rotund frame looked imposing with his 6’3″ height.

If you like old television shows, you probably know the actor. In my opinion, it’s worth your time to connect the actor and the name.

TRIVIA: In the Star Trek episode Mudd’s Women, Spock pulls up an ID scan for Harcourt Fenton Mudd. At the bottom, it said he was 6ft 1in and weighed 240lbs. They were a little off on both accounts.