How can you tell when a clock is really tense?
When it’s all wound up.

Creating tension by using some form of a limit is one of the easiest methods to ratchet up the tension in any manuscript, from novel to play to movie script. When many newer authors first hear about adding in a “ticking clock”, they immediately think of a suspense movie where the hero has to defuse the bomb before the time reaches zero. While this is a very common trope, it goes beyond that limited scope. 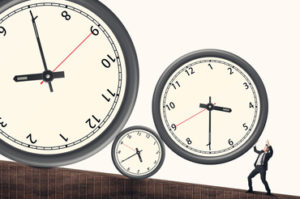 A ticking clock is an example of something that is constrained and must be dealt with, lest the characters have to deal with serious (and often dire) consequences if they fail. The entire plot can be constructed around the ticking clock, or it can be something smaller, such as a scene, where the protagonists have to get something done immediately.

In honor of Carrie Fisher’s passing recently, I’ve been re-watching Star Wars. They have a whole slew of ticking clocks embedded within the script. For example, Han, Chewie, and Luke have to rescue Leia from the Death Star’s prison block because she is scheduled for execution. The ticking clock is the time limit they have to rescue her, and the consequence of failure is the character will be killed. Another example is Luke and Leia running away from the guards and getting trapped by the missing walkway. Under fire, Luke closes the door and blasts the controls, not thinking that they probably control the retracted walkway. The Stormtroopers are trying to open the door — that’s the ticking clock. Luke and Leia have to escape, or else they’ll be shot — that’s the consequence of failure. The audience was sitting on the edges of their movie theatre chairs in 1977, wondering if they’d make it. That’s tension.

Got Any Examples Without Using a Clock?

Sure! How about the old black and white movie “House on Haunted Hill” with Vincent Price? There are two versions of a ticking clock in that movie. There’s the usual version we talked about (the characters have to survive the night in a haunted house) plus the characters are getting killed off one by one. That’s a countdown where we’re wondering who the killer is — he or she must be with the house guests. Will we find out before they run out of living people? Is the killer even human?

I Write (Insert Genre Here). Can I Use a Ticking Clock? 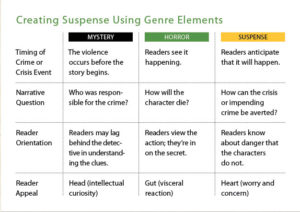 The ticking clock method of generating tension in a story can be used anywhere in fiction. Here’s some more examples:

Setting up a ticking clock is a particularly good way for beginning writers to add tension to their stories. Most writers are familiar with the general idea and they’ve probably seen enough of them in the movie theatres. 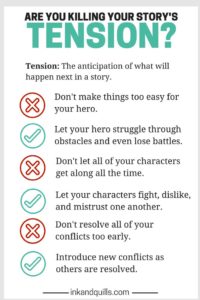 The most important things to setting up a ticking clock/limited something scenario are:

Look at the time! Get back to writing!